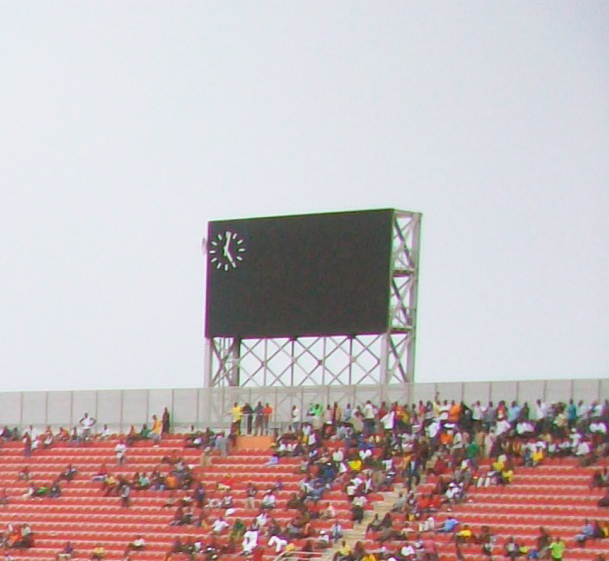 I was at the big football game in Accra on Sunday afternoon.  The Hearts of Oak from the capital were playing the All Stars from Wa in the north of Ghana, at the recently constructed state of the art national stadium.

I asked my neighbour why, in such an impressive setting with a wonderful modern scoreboard, did they not use that same scoreboard for something more than the clock. He explained that it would not be worth it as the majority of people in the stadium would not understand much of the information displayed. I gathered that some would even feel uncomfortable or threatened by the written form.

After 10 days in Ghana, I have engaged in many intense, lengthy and verbose conversations with others. I would often assume that the other person were literate. So without a second thought, I would ask them to read a phrase, consult a map or point out something on a menu. They hesitated. Embarrassed, they struggled to explain to me more or less what they thought I wanted to hear.

I am learning that many people who can express themselves verbally with a fair amount of subtlety are not literate.

Mobile phones sales in Africa are exploding and some of the biggest companies on the continent are phone operators. Whilst this is a social phenomenon that will benefit society at large, it will not compensate for the lack of capacity to “connect” in written form.

In fact, people are becoming more aware of their need to read and write in order to supplement their verbal communication with their newly found and developing network of mobile contacts. The use of SMS (text messages), which are cheaper than voice calls, are one example.

To be literate is to be “connected” in many more critical dimensions than simply the verbal. For a country with the potential of Ghana, these connections matter. Literacy matters.

Hearts of Oak had an equalizing goal disallowed in the 94th minute and lost 1 -2 to the All Stars with the game ending in chaos. Scoreboard confirmation of the result would have been welcome!