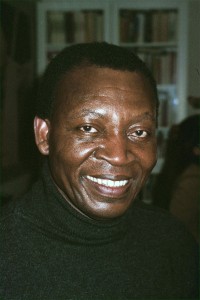 In Ghana, books were hard to come by when children’s author Meshack Asare was young.

The nearest library was 24 miles away, and a mobile book unit visited his town every six months or so. While he managed to get his hands on the few school textbooks, Royal primers, Oxford English readers, and the occasional classic like Treasure Island (which Worldreader students also can access), Meshack mostly made do with his father’s collection.

“They were mostly history books, books about the fall of Rome, the British empire and things like that. My father also had some Western magazines and a few National Geographic copies,” Meshack told Worldreader.

Later, at university, he experienced a turning point that changed his reading and writing life.  A friend had gone to Brazil and returned with a story he wanted Meshack, an art student at the time, to illustrate.

“I knew about Brazil from my geography lessons, but I hadn’t seen photos of what Brazil really looked like, or what the animals or people looked like,” he said. “I had to go to the library in Accra to do research. It was the first time I saw real children’s books, from Europe mainly, and some from the United States, Russia, and China. It was only then I had a clear idea what a children’s book really should look like.”

“After I did the illustrations for this book, I realized I didn’t have [these kinds of books] as a child,” Meshack continued, recalling how many of the elementary learn-to-read materials left him wanting more. “These books had little stories and poems, Jack and Jill fetching water and that sort of thing. They were influential in the sense that they showed me what other children did, how they lived, and what kinds of things were around them. But I could not connect them to my own environment or experience. I thought it would be great to have a book about things that I, too, could recognize.”

Many books later, Meshack has developed a somewhat pragmatic, Zen ideology about reading.

“Reading underlies everything. It’s something I like to compare to religion,” he said. “If you think of religion as something that offers a picture of something more grand than us, reading does the same thing. Reading enables us to lift ourselves from our current situation to something higher – and better. It expands one’s own imagination.”

“It is essential for children, especially children in developing countries, to be helped by every means possible to be able to read, to have books to read, and to have books that tell them about themselves,” he explained.  “It’s also important to make a ritual out of reading …and to have the ability to look at symbols and words and form meaning from them. It is as important and necessary as eating and as brushing one’s teeth.”

It makes sense, too, that electronic media and ebooks could play a key role in bridging literacy gaps in the developing world, he added. In this vein, Meshack has donated two of his books to Worldreader, The Canoe’s Story and The Cross Drums.


Worldreader has digitized these two gems and included them in our growing list books that includes classics like Dr Jekyll and Mr Hyde and Kidnapped, international best-sellers, and regional favorites.  In a few weeks, our iRead students will have Meshack’s books on their Kindles as well. And, like Meshack, we’re looking forward to bringing great African literature to kids in Africa, and to help expand the rest of the world’s imagination.

Thanks for the chat, Meshack!

For more information about how Worldreader is bringing books to all in the developing world using e-readers, visit us at Worldreader.org.

An illustration from The Canoe’s Story 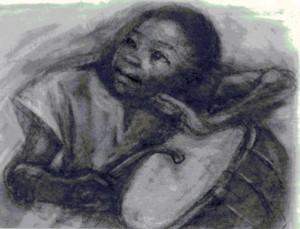 From The Cross Drums, one of the books donated by Meshack Asare