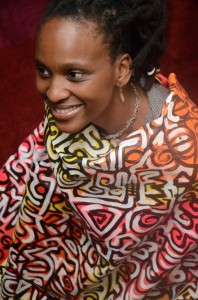 Worldreader recently spoke with Chika Unigwe, a Nigerian-born author now living in Belgium. We talked about the books she read as a child, writers who influenced her life, her early attempts at getting published, and the gift reading gives all of us. Here are excerpts of our Skype chat.

WR: What book made you fall in love with reading? Changed your life?

Chika: When I was about nine years old, I read Little Women by Louisa May Alcott. It was the first novel I read. I loved the novelty of it. I felt thoroughly grown up. I grew up with four sisters so the March girls seemed very familiar, and my father was away a lot like theirs. I could empathize on a lot of levels.

WR: Who gave you the book? Where did you find it?

Chika: A “social” aunt. I called her aunty but we were not related. When I was eight years old, she came to my primary school looking for a kid to co-host a radio show with her in Enugu in southeastern Nigeria. She wanted someone to read music requests from listeners. I was recommended to her. She took me under her wing, and our show was a success. We forged a beautiful relationship. She’s a big movie star in Nigeria now. Her name is Patience Ozokwor.

WR: Does she know about your success?

WR: How did you feel reading Little Women? How did it impact you?

Chika: For starters, it got me hooked on novels. I think that the first novel I read encouraged me to continue. I read everything because all my siblings had different reading tastes and my parents catered to all of them. I read my brothers’ James Hadley Chase and Robert Ludlum books, my sisters’ Mills and Boon and Harlequin romances, and discovered what my preferred genre was.

But, more importantly it made me realize that we shared — despite our differences — a common humanity.

WR: Did being an avid reader influence your decision to be a writer?

Chika: I am sure reading had an impact on it, but when I was much, much younger, five or so, I had a classmate whose mother was a writer, Flora Nwapa. She was the first African woman to be published in the U.K. She was published in 1962, four years after [Chinua] Achebe. Her first novel is called Efuru. Flora also started a publishing house in the ’80s and published lots of children’s picture books and storybooks.

She’d bring us books to keep us busy while waiting for our parents to fetch us after school or while she had a quick chat with our teacher. Before then, the only storybooks I had read were Enid Blyton’s. I was fascinated by Flora.

WR: Why? What fascinated you?

Chika: The fact that she was a writer. I had never considered it as a career option because on career days in kindergarten they told us about all the traditional jobs — doctor, lawyer, teacher, regular professions.

Flora was refreshingly different, and I wanted to be like her.

When I was 13, I got her phone number and called her to pitch a novel I had written. It was about a couple who got separated on their wedding day — the man dies in a car accident –and, after years of unhappiness, the bride finds love unexpectedly again

WR: What did Flora say? Was it published?

Chika: No. I called Flora. She was very nice and asked me to bring it in. But I needed my dad’s driver to take me to the publishing house. Somehow I never managed to go and I had to go back to boarding school. By the time I came back, I didn’t want to pursue it anymore. I wanted to write something else.

I wrote a play the next year. I sent it to a television station. They sent me a nice rejection letter.

WR: You were very lucky to have these kinds of people in your life and to have access to so many books. Why do think it’s important for kids the world over – but especially in Africa – to have access to books or e-books?

Chika:  I think it is important for kids– all kids– to have access to books, but in places where books are not easily available or affordable, e-books make a lot of sense.

Books and stories help us get a perspective on just how small we are, on the common denominators we share even in our differences, and on how there are no absolutes. They help create a sense of empathy and understanding.

When I think of the importance of reading and discovering worlds beyond our own, I think of a poem we learned by heart in primary school: The blind men and the elephant.

These six blind men try to describe an elephant simply by touching it. Depending on what part of the body they touched, they came up with a different description. One touches the side and declares this elephant is very like a wall. Another touches the tusk and declares it’s like a spear. They are all right, of course, but their rightness is only one part of the true story, and they each stick to their versions of rightness, which, while not being wrong, is only one version.

[Reading shows] that your version of the truth is yours, and you can’t push it down on others whose version is different. [It also teaches us] that there are many ways of doing things and yours isn’t necessarily the better one. It’s just different.

WR: What are you reading now?

Chika: Edward Rutherfurd’s London. London is a novel in parts about London from 54 B.C. to the 1990s. And a novel by Siri Huvset called Blindfold, and Teju Cole’s Open City.

Thanks for the chat, Chika! 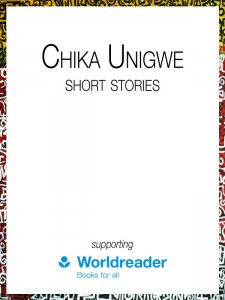 Chika, who has written the well-received novel On Black Sisters’ Street, has donated a collection of short stories to our program.

People like Chika, Meshack Asare, Ellen Banda-Aaku, and other African and international authors are making a big difference in the lives of our kids. They enthusiastically support Worldreader’s “Books for all” goal by donating their books, short stories, and personal essays.

We hope you’ll give these great authors some love, too. Check out our growing list of participating authors and publishers.

If you’re an author and would like to get involved, contact our Director of Digital Publishing Elizabeth Wood at publishing@worldreader.org. You’ll also find her on Twitter at @lizzywood.

The Fun in Fundraising