Bringing Worldreader Sponsors to the Table

Last month, we highlighted some of our 2012 achievements, including our expansion into yet another new country, Tanzania, at the Upendo School. The three-way partnership formed between the school, its primary funder, AfricAid, and its sponsor, Thanks Be To God Foundation, also marks another milestone for Worldreader. Besides being the first school in Tanzania to have an e-reader project, the Upendo School represents a new model for Worldreader, and a great demonstration of the potential our new Worldreader Sponsorship Program.

Worldreader loves getting books into students’ hands, but success for our e-reader projects requires a lot more than just shipping a box of e-readers to a school. The school needs to be in a position to provide electricity to power the e-readers, WiFi or 3G access, buy batteries for the e-readers (sometimes this cost is provided by the individual students themselves), and especially to provide a trained project manager to train teachers, oversee the launch, and provide ongoing support, including curriculum design to fully incorporate the e-readers into the classrooms. A Worldreader Kit isn’t cheap, either – although our e-readers and books are substantially subsidized, costing between a quarter and a third of their retail value, the whole Kit is between $9,000 and $14,000. Most of our partnering schools raise this money themselves. When schools provide funding for the project themselves, they are consistently more invested in a successful outcome, and making sure the Kindles are used enough to make even their subsidized cost worthwhile. However, there are many schools with the potential to be great partners with very successful projects that nevertheless can’t raise all of the funding needed themselves. This is where a sponsor comes in.

This particular project involved several organizations coming together in one place for one mission, so let’s take a look at all the moving parts, as it were! 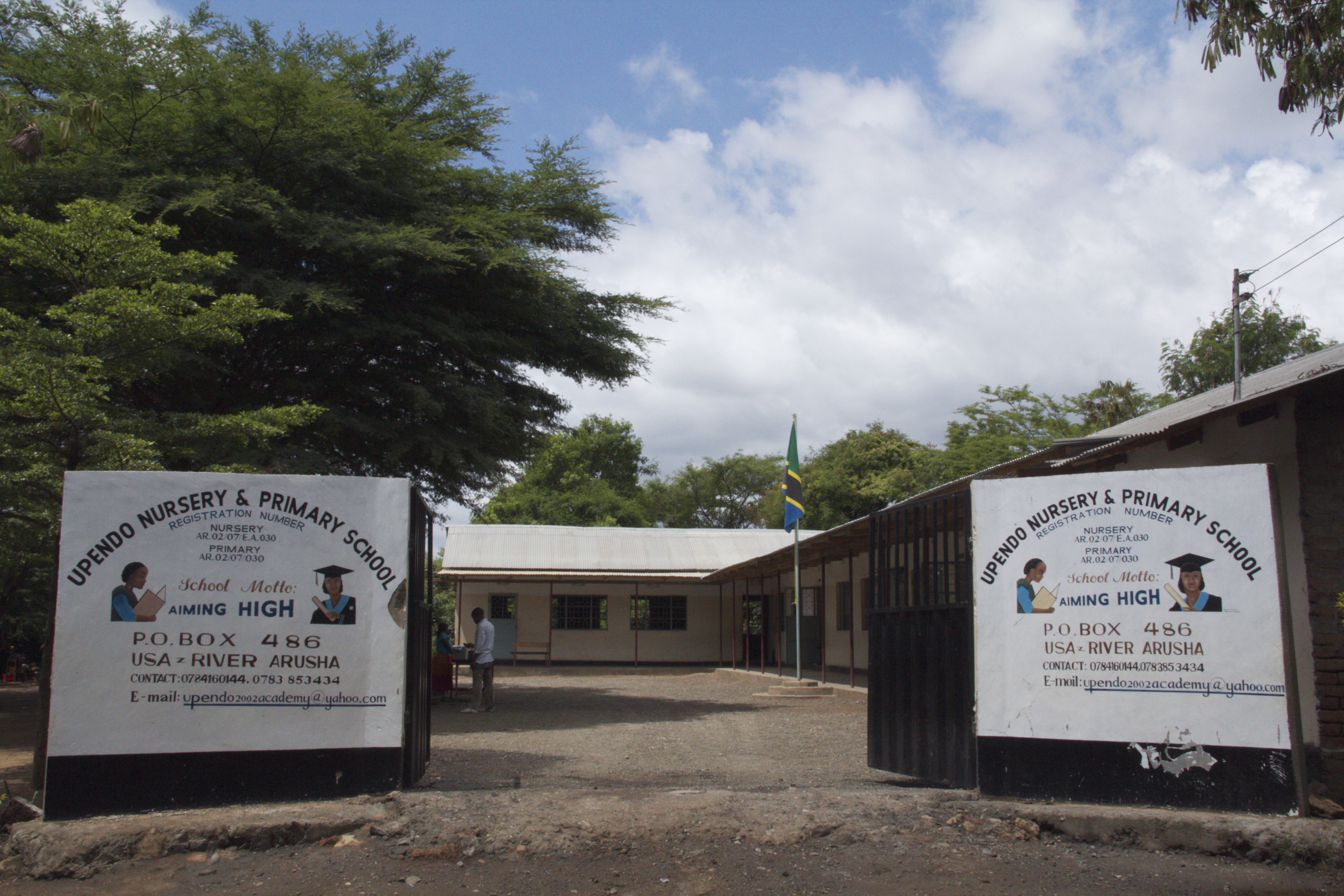 The school was founded by and is administered by former game warden Protas Kitia, who spent 30 years as a guide and wildlife conservator in the Serengeti, before returning to Arusha and founding the school to address the needs of the many children he saw on the streets in the region. The school has had great success, outperforming students from other schools across the region despite coming from impoverished homes.

One of its outstanding features is the choice to teach all classes at the primary level in English. Most schools in the region teach younger students in these classes in the native Kiswahili, and switch to English for secondary teaching. This linguistic shift is very hard for students, though, and many drop out instead of continuing with their education. Upendo’s English curriculum is a particularly good match for Worldreader’s digital library, which contains a majority of books in English, although we also have texts in Kiswahili, Swahili, Kinyarwanda, French, and more. Upendo’s strong record of academic success, well-maintained infrastructure, connection to the community, and positive future outlook made them an ideal candidate for an e-reader project with Worldreader.

AfricAid is a nonprofit organization with the mission of offering educational opportunities to African girls, especially those in Tanzania, whose graduation rate is only five percent, one of the lowest in Africa. AfricAid offers funding to schools in Tanzania, Kenya and Zambia, including Upendo Middle Primary School. AfricAid maintains the school buildings; has implemented a school lunch program, which is a great boon for many of the students who come from homes where there isn’t always enough to eat, and solicits foreign supporters, who can directly sponsor an Upendo student’s education for $500 a year.

AfricAid approached Worldreader on behalf of the school; they recognized that school was a perfect fit for our programs, and they had the operational resources to oversee the program, but they lacked the funds required for the implementation.

Thanks Be To God Foundation

The Thanks Be To God Foundation was founded by Dwight Smith in Ohio, and is dedicated to supporting children around the world, especially in their pursuit of education and the possibilities of entrepreneurship. They have worked in Tanzania in the past, building classrooms with the Bricks for Life, and raising money for teacher accommodation in the same area through a hike up Mount Kilimanjaro.

The Foundation was interested in supporting the goal of e-readers in African classrooms, but did not want, as they put it, to “recreate a similar [e-reader] program, but rather to work in partnership with organizations committed to this important cause.” They had no long-term relationship with an appropriate school, but contacted Worldreader in hopes of being able to sponsor one that we were aware of. A perfect match!

Worldreader’s Director of Research and Business Development, Zev Lowe, and Partnership Development Manager, Michael Smith, were on hand to support the November launch. The Project Manager, Devotha, trained eight teachers, at the school, and those teachers then presented the e-readers to the students. The school teaches primarily in English, but the first book the students read was in the local language, Kiswahili.

The book, Kanuki na Mti wa Matamanio (Kanuki and the Wishing Tree), is a story about a giraffe born with a short neck. Although it was the first ‘story’ book that some students had ever read, the familiar language and subject matter made even the new e-readers seem less intimidating, and they couldn’t wait to find out how the story ended. Our staff also enjoyed seeing the children read Wayne Visser’s poem, “I Am an African” aloud. A well-publicized launch party afterward left them confident of community involvement, another valuable ingredient for a successful project! 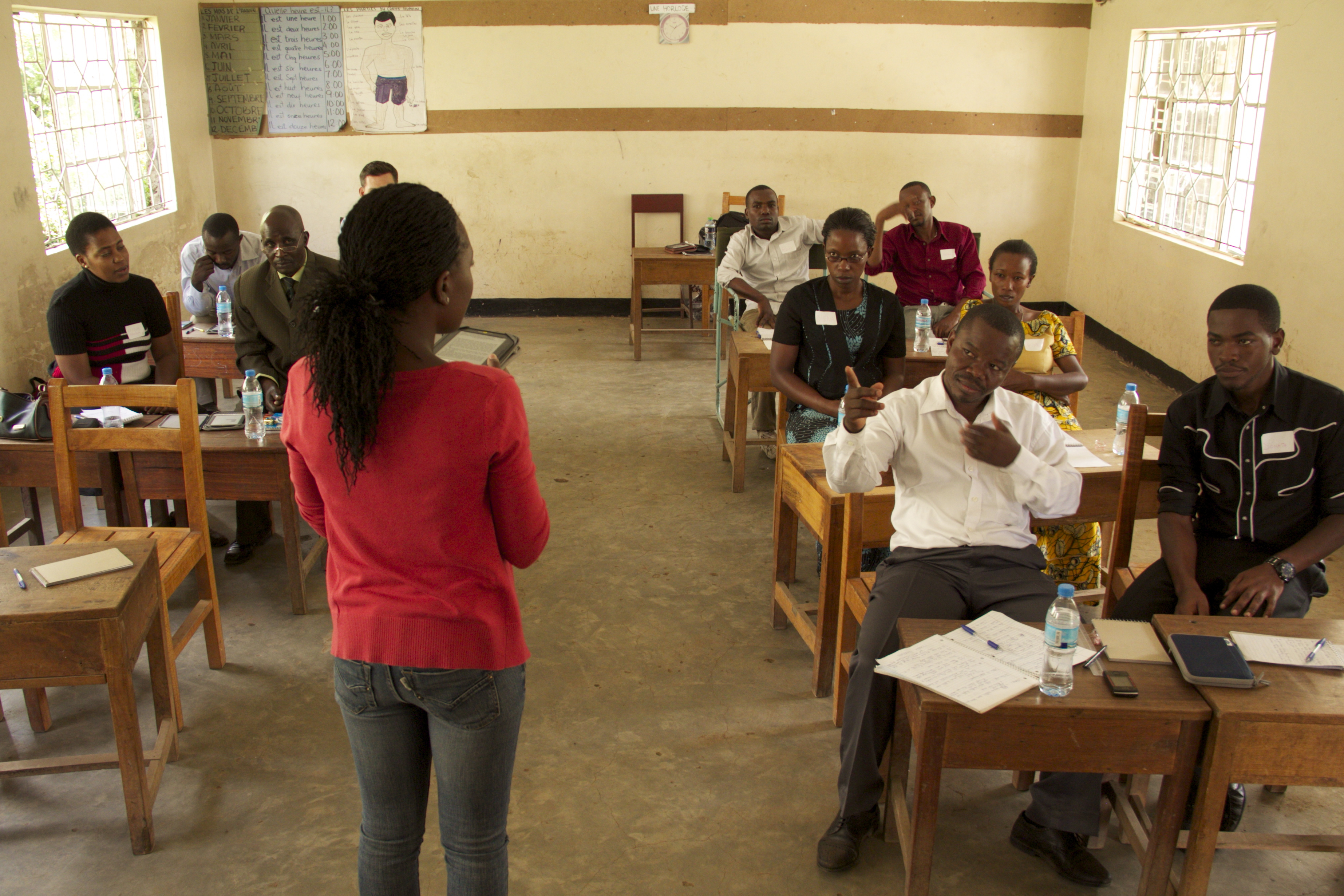 Devotha trains teachers and a visitor from the Nelson Mandela Institute

Bringing everything together to make this project work was very satisfying, and proved that we could begin offering something we had long hoped for: The Worldreader Sponsorship Program. Under this program, schools like Upendo, which have the infrastructure, community roots, potential and history of consistent results that we’re looking for in a Worldreader project school, but which lack the funding to bring in Worldreader Kits themselves, can apply to become a partner school.

Similarly, nonprofit groups and potential donors who want to make a direct difference to the future of education in Africa but who aren’t affiliated with a school on the ground there can contact us and ask about being matched with a potential Kits partner.

This new program is already bearing fruit. We have three new sponsored projects lined up so far in 2013, including the Kibera Girls’ Soccer Academy in Nairobi, Kenya, Nsaba Diapora Girls School in Obodan, Ghana, and the King George VI Rehabilitation & Learning Centre, which will be our first project in Zimbabwe. All three of these projects were sponsored by private donors. We hope that many of our other partner schools can use sponsorship to expand their current projects into more classrooms with more e-readers. The people who want to read and the people who want to share reading are connecting through Worldreader – it’s just another example of books bringing people together again! 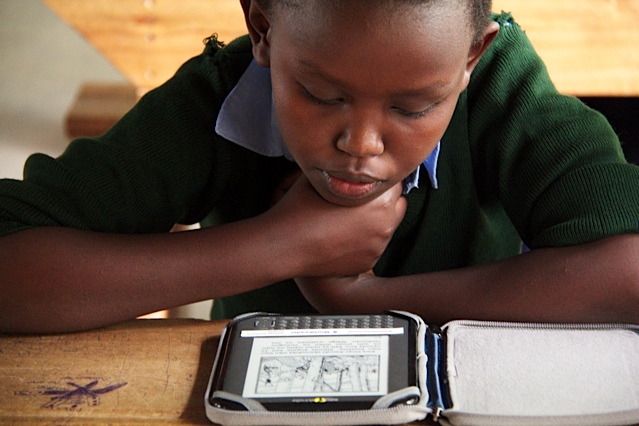 An Upendo student engages with his new e-reader