To say that we have been welcomed with open arms by the village and by the OrphanAid Africa school here in Ayenyah Ghana would be a huge understatement.  There is an innate curiosity here about the outside world, and an eagerness to try new things.

Which is exactly what we encountered when we met today with the headmaster of the school and the grade 6 teacher whose classroom we will be working in for the next two weeks.  After we explained the Worldreader mission and handed them  Kindles, they both expressed their enthusiasm and very quickly learned to navigate and read. 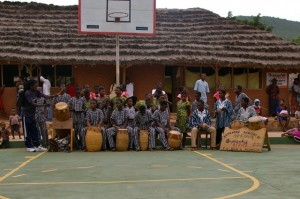 There were several questions about which books were available,  like The Little Mermaid and The Princess and the Pea (which they call The Princess ON the Pea).   Oral storytelling is strong here, and they seem to have a natural affinity for morality tales, including many stories by Hans Christian Anderson and Grimm’s Fairy Tales.  The only question we could not answer to their satisfaction was whether their school textbooks could be put on the Kindle, which at the moment is not feasible, but is a definite possibility in the future. 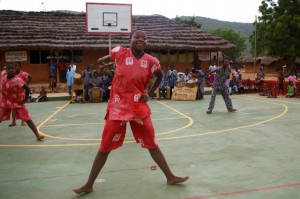 The really delightful surprise of the afternoon, however, was a dance performance put on by the children of the school.  With a dozen boys very expertly playing the talking drums and djembes, and a chorus of girls singing and clapping, several troupes of girls and boys dressed in bright colorful costumes careened around for more than an hour of very athletic, joyful dancing. We sat in four chairs out in the middle of the play-yard, with kids hanging from each arm, completely entranced. 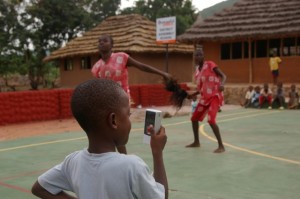 And as you can see, we had some help from our little photographer friends, who took some of these pictures.  The dancers even pulled us out of our chairs and made us dance, but those pictures have been stricken from the record due to potential embarrassment to the Worldreader organization!

We were all moved by the warmth of their welcome, and the honor of being included in this very special event.  This afternoon was a vivid reminder of the beauty and richness of this culture, and has given us an even greater feeling of responsibility to respect their ways while we learn from them and work to find new ways to spark imagination and learning in the kids and families through reading.

Ghana: First day in the classroom