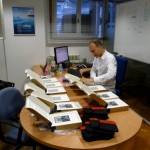 About 18 months ago, before Worldreader even had office space, the team unpacked 20 Kindle 2s, and a handful of children’s books were uploaded onto the e-readers. With ambitious plans sketched out on paper and a lot hope in their suitcases, Worldreader’s Colin McElwee, David Risher, and Mike Sundermeyer flew from Barcelona to Ghana and started to test what would soon become our iRead pilot.

About the same time last year, using money from a four-year technology fund, Clearwater, Fla. High School (CHS) administrators purchased about 150 Kindle 2s, and handed them to teachers. They wanted to make sure the educators had plenty of time to get used to their new classroom tool. When the following school year started, e-readers would be in nearly all of the students’ hands, replacing the bulky textbooks they lugged around. 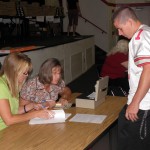 A Clearwater High School students gets his new e-reader.

A few months later, the pilot programs were officially launched, and have since become the largest institutional e-reader rollouts anywhere in the world (so far, no one else has come forward to prove us wrong). Now that the initial pilots have come to a close and the next steps are already being phased in, we thought it was good time to reflect on how far both programs have come – and how they have evolved – since the early bright-idea days. Last week, we kicked off the three-part series with a look at the technology and networking capabilities. Today, we’ll talk about the publishing and content distribution side of the puzzle.

We all know content is king, and with increased global connectivity via the Internet and mobile phone networks, information is everywhere, coming in from many different sources at any given time. E-book sales are also growing hand over fist as more people transition from printed to digital materials. In fact, Publishers Weekly reported last month that e-book sales for the first half of calendar 2011 rose 161%, to $473.8 million for the 15 major publishing houses that feed data up to the Association of American Publishers.

Although e-books have gained popularity among individual consumers, getting publishing companies, media outlets, and other content providers to donate age-appropriate digital books that have educational value in a classroom setting, without being disruptive to lesson plans, and where hundreds or thousands of students would have easy access, well, let’s just say that takes some persuasion. Impressively, though, both Clearwater and Worldreader have made significant strides on this front, ensuring that their students have a mini-library of books in the palms of their hands. But there’s still work to be done, and many more opportunities stand to take root.

At CHS, the pilot’s main objectives were to start migrating away from printed textbooks and supplemental teaching materials and better utilize technology in the school. This is an issue that soon many school districts, at least in the United States, will confront. State legislators, including those in Florida, are passing laws that will require public school districts to spend some percentage of their book budgets on digital content within a few years time, or redefine the digital and print divide. E-readers, tablets, and perhaps some other device in an early-stage development stage will be finding their way into any number of classrooms in the near future.

Ahead of the curve, a CHS teacher, using the e-reader during the test phase, stumbled upon the availability of the CK-12 series of e-books, which led to the decision to purchase math and language arts textbooks and supplemental science and reading materials, said John Just, assistant superintendent of MIS for Pinellas County Schools.

At launch, roughly 100 books were available to the staff and students at Clearwater High, 60 of which were purchased, noted Jim Bence, the school district’s computer support analyst in the Office of Library Media/Technology. Within the last year, the high school uploaded other free and paid books, mostly classics like Gulliver’s Travels and Pride and Prejudice, and local newspapers, bringing the average up to about 15 to 20 books on each student’s e-reader, he said.

This year, additional textbooks and learning materials in other subject areas, including science and English, are on the e-readers, and future Kindle store purchases are being planned.  When kids and teachers returned to school this year, they had about 50 titles each, on average, added Jim.

“One of the biggest challenges is content. We are on conference call after conference call trying to convince publishers to give us material in the format that we need,” said John. “That is the biggest detriment at this point to making the program an even bigger success. They see this as a big affront to what they are trying to do. People sat across the table from us and said you’ll never be able to do that.”

Yet, they did. And so did Worldreader, which had a different starting point than CHS but ended up with many similar outcomes.

Although Worldreader’s goal is to give people the world over access to books by leveraging existing technology, building a culture of reading has to begin at the school level. Going that route in a developing country often involves forging deep relationships with government organizations and international and regional publishers.

From go, Worldreader teamed up with USAID to fund the program’s measurement and evaluation portion, and has worked closely with Ghana’s Ministry of Education to get the pilot off the ground last November with about 500 students across different grade levels. Conversations about how to expand it  in the next few years are currently underway, said Worldreader’s Managing Director Colin McElwee.

On the content side, while it was clear that we would have access to the same literary classics as CHS and we could find textbooks that would meet the curriculum requirements, we would have to go beyond that if we wanted reading to stick. The handful of children’s books we initially delivered, which included Fairy Tales Every Child Should Know, Folks Tales From Ghana, and a Curious George and Magic Tree House volume, had only whetted the kids’ appetite.

We began having discussions with big-name publishing companies,  including Random House and Penguin, and authors such as Mary Pope Osborne, Holly Black, Cory Doctorow, Keith Thomas, Janet Wong, and Daniel Pinkwater (other notable writers will be announced in the coming quarters).

Early on, too, the team chose to loop in African authors, such as Meshack Asare, Ellen Banda-Aaku, and Chika Unigwe, and publishers like Smartline, Afram, and Sub-Saharan. We wanted to offer a breadth of content that not only had international appeal, but also would give the local market access to their own regional literary icons. More importantly, we realized almost immediately that stories had to relate to the students’ cultural context, which is lacking in most Western literature. Later this week, we’ll look at why that was relevant and what happened when kids got the e-readers in their hands.

Between our launch with just a few books and today, you’ll find 352 international and African titles in our Worldreader database. On average, each student and teacher now has 99 Worldreader-delivered books on his e-reader plus whatever samples and free, public domain books they downloaded individually.

To make donating their books more appealing to publishers and to encourage the idea of building a long-term relationship, Worldreader is providing publishers with market research about which books are being read, Colin added.

“With our publishers in Ghana, we share with them insights about which books the kids are reading and why. We package that information and report it back to the publishers,” Colin said. “Although the publishers are giving us their books for free for the pilot program, they are getting feedback from the market and from a new digital platform. That’s incredibly valuable for them.”

How publishers will continue to adapt to programs like those being pioneered in Clearwater and Ghana will surely be a topic of conversation at the upcoming Frankfurt Book Fair, one of the industry’s marquee events. Our Director of Digital Publishing Elizabeth Wood will be there, and will certainly have lots to share when she returns.

Until then, we’ll wrap up this series on Friday with a post about the in-classroom e-reader experience and some surprising results coming out of Clearwater and Ghana. 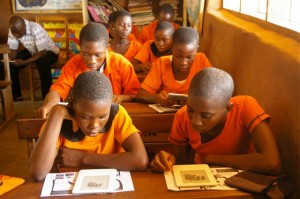 Figuring how the e-reader works in Clearwater, Fla.