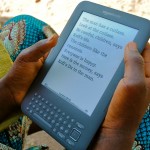 Kids, regardless of where they live or what social or cultural background they come from, have a natural ability to pick up a device, fiddle around with the drop-down menus, and figure out how to make the technology work for them.

It was no different when students in Ghana and Clearwater, Fla. were handed an e-reader. Curious expressions soon faded as the kids bounded through the training and moved beyond uncertainty to mastery.

This week, we’ve painted a picture of how two of the world’s largest e-reader pilots — spearheaded by Worldreader and Clearwater High School (CHS)—have evolved in the last 12-18 months. We examined the technology issues and talked about the value of building meaning relationships with publishers and content providers.

But the true test of whether it would all come together and actually affect change depended on what happened in the classrooms. This is where we saw some striking similarities and differences.

In Ghana, the first hurdle we had to overcome was a language barrier, especially with the younger children. While English is the language used in the schools, the kids were less familiar with words like “Settings” and the differences between “Back” and “Previous Page.”

The older kids in both pilots, though, took to the Kindles relatively quickly and within a couple of weeks made them their own. In both cases, on opposite sides of the world, kids did what kids do. They figured out how to download music, deregister the pilot-controlled account, create a personal log-on, and find social media platforms.

School administrators reined in that activity, reminding student about promises they made when the devices were distributed. In Florida’s case, students signed an Internet use agreement, said Bonnie Kelley, Clearwater High School’s supervisor of library media technology. In Ghana, students and the broader community took a pledge to support the program and care for the devices.

Once the initial excitement of having a 3G and Wi-Fi enabled e-reader in their hands died down, kids and teachers settled into a more normal routine. Electronic books that had been pushed in the classrooms were being read, teachers found new ways to incorporate e-readers into lesson plans, and kids were getting into the habit of using digital materials.

Some other noteworthy things happened as well.

In Clearwater, the Kindles became an equalizer, something that leveled the playing field between higher-achieving students and those that have been traditionally seen as lower-achievers, said John Just, assistant superintendent of MIS for Pinellas County Schools.

“There were students who would see a textbook or a novel in printed form and didn’t connect with it. For whatever reason, they hadn’t been successful in using them,” he said. “This [pilot] created a new opportunity for them. Some of the most compelling feedback we got when we walked around the different classrooms came from those classrooms with students who were struggling and those lower-level reading classes. Kids were using the tools like the dictionary, highlighting sections of the text. Those tools were very helpful for them.”

John also pointed out an interesting contrast to this dynamic.

“In some of the higher-achieving classes, the kids shrugged and said ‘Ah, I kind of like my book,'” John said, adding that those students had previous successes and a comfort level with printed books. “For many of the struggling students who had never, in many cases, had the ability to acquire such a device, it offered a new lease on learning.”

The books the high school students choose to read and how they related to them also raised eyebrows, said Bonnie.

“I didn’t think they would take to highlighting text, making comments, and sharing that with their teachers. But they did,” Bonnie said. “The students connected to the text, and made connections to themselves.”

“The day we distributed the Kindles, I was standing behind a girl and overheard, ‘Oh, look! I have Pride and Prejudice on my Kindle. I can’t wait to read it!” added Bonnie. “I’m a former English and reading teacher, and I know how kids respond to certain books. That was a real shocker.”

Understanding the motivation behind what makes kids latch onto to reading and which books they choose to read is as important as tracking improvements in reading fluency and comprehension, said Colin McElwee, Worldreader’s managing director.

“For a program that’s based around a piece of technology, technology, in this case, is the least important piece. What’s much more important is the content being used in education and the human behavior around that,” Colin said.

Since the kids in Ghana have a much different starting point with books—something highlighted in this video— the way they use the device is slightly different, too. Because they have so little access to printed materials, they are using the Kindles to discover the world and learn about things that had not been readily available to them.

Besides the e-books Worldreader delivered to them, kids are downloading international and regional newspapers and magazines, free samples, textbooks, other local content, and public domain books. They’re interested in sports, religion, fiction, and non-fiction. They are reading at the market, with their families, and teaching each other the Kindle’s ins and outs. Even when school is not in session, they show up, excited about flipping through more virtual ink.

“We’re trying to gauge what they’re interested in reading. We want to know what’s challenging them,” said Colin. “Over time we’ll get much better at knowing what their understanding is of particular passages or texts.”

While anecdotal evidence is nice, the real proof is in the pudding. We’re waiting for final numbers to come in, but our preliminary findings show improvements in reading fluency and reading comprehension. In one primary school, for instance, students improved on average 13% from their scores five months earlier. We’ll update you as we review the stacks of data coming in.

So where do CHS and Ghana go from here? Thankfully, both projects will continue.

In Florida, school administrators are increasing their e-book database, researching how teachers are adopting technology, and extending teacher training and coaching. School administrators are examining ways to pilot similar programs in other schools throughout the district, and will consider the trade-offs between e-readers and tablets, such as Apple’s iPad.

In Ghana, Worldreader is working with the same group of students as they move up a grade, and plans to expand the program to include other grade levels in the future. We’re talking to more publishers and authors as well. We’ve also expanded into Kenya and are looking at other opportunities in Africa and elsewhere, with the aim of reaching a million kids by 2015.

Have you heard of any other large-scale e-reader pilots? Tell us about it on our Facebook page or via Twitter at @worldreaders. 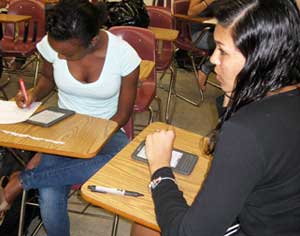 Immersed in a good book (Ghana)