On Reading and Revolutions

It’s anyone’s guess if the events leading to Mubarak’s resignation would have happened without Facebook and Twitter.  Having visited Egypt myself last year, I can say that there’s been a tremendous amount of frustration and anger building up for years against the President and his policies.  And as many have noted, if the Egyptian people hadn’t been ready to protest, Facebook wouldn’t have mattered. 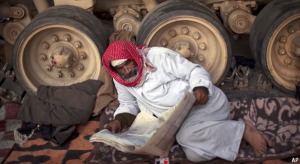 But they were ready to protest, and Facebook and Twitter did matter.  And if you can’t read, you can’t Tweet.  Without books and written material, it’s pretty hard to learn to read, let alone become a curious citizen of the world.

As we’ve seen recently in Egypt, books represent more than words on paper or a screen. They symbolize the gifts of knowledge, sage wisdom, and freedom of expression.

Egyptians understand the role literacy plays so deeply that people recently risked their personal safety to protect the nation’s library in Alexandria. According to media reports, including one posted in the Guardian in the United Kingdom, the city’s youth, working with the army, took it upon themselves to safeguard the library from vandals, and looters. Having seen their ancient library ruined, Egyptians want to see the modern version– and the knowledge within– survive.

In the very long run, Worldreader aspires to have an impact on the societal level as well as the individual level. While we’ve already has made very personal connections, as seen from the letters by some of the 500 students and teachers in our program, we aim to also create a positive and lasting advantage for the broader community.

According to UNESCO statistics, more than half the 6th grade students in six sub-Saharan African countries attend school in a classroom without a single book. Only 40% of schools in Kenya have any kind of school library… and their definition of a library is extremely broad.  Yet access to a 500-book library seems to be roughly equivalent to three years of schooling.  Students in our program have an average of 85 books each that they carry with them and share with parents and friends. This number grows daily, and in the next few weeks, we’ll announce how our program participants will have access to even more books.  Also, thanks to the aggressive promotional work going on with e-readers everywhere, they will continually have access to hundreds of new books.

This is all incredibly exciting: the more books we make available, the more likely it is the kids and families will find something they enjoy. We believe that over time, the cumulative effect of our work could have an enormous impact on entire societies where we operate. Children who grow up reading will have increased opportunities to excel economically, affect social change in their communities, and influence their nation’s overall well-being.

Our mission is “Books for All,” and that means figuring out how to support people everywhere, not just one country at a time.  It’s a big goal, but in the long term we want to help individuals and societies all over the world get access to the world’s books so they can improve their lives.  That might mean becoming a doctor and saving a life.  Or it might mean being able to send a Tweet that galvanizes a revolution.

To Worldreader with love

Visual Identity- much more than a logo