Two years ago, we set out to try something unprecedented: using mobile phones to get entire communities to read with their kids. Along with our co-founder, Pearson (as part of Project Literacy), we set the ambitious goal of reaching 200,000 families in and around Delhi, India over the course of the pilot we coined Read to Kids. Last month, we met that goal.

On Friday, a grand jury of 21 sector experts announced that they had awarded the 2017 mBillionth Award in the Learning and Education category for the Read to Kids pilot program. The award—which  recognizes excellence in mobile communications across South Asia and is given out every year by the Digital Empowerment Foundation—affirmed what we have seen in the early results of the program—access via mobile phones can bring books into the lives of hundreds of thousands of children.

Read to Kids supports children’s literacy development by providing access to digital books on any data enabled mobile phone and by encouraging parents and caregivers to spend time reading with their young children. Over the two-year pilot we worked with Indian and international publishers to curate and digitize a collection of over 400 Hindi and English storybooks that we made available for free through our Read to Kids app. Through partnerships with three community-based organizations that are working in schools, communities and health clinics—Sard, HLFPPT and Katha—we helped parents and caregivers build their skills and confidence in both reading and in using the app. We also did extensive community outreach to create awareness for the Read to Kids app and reached millions of people in the Delhi region with a behavior change campaign that promoted the importance of reading to young children. 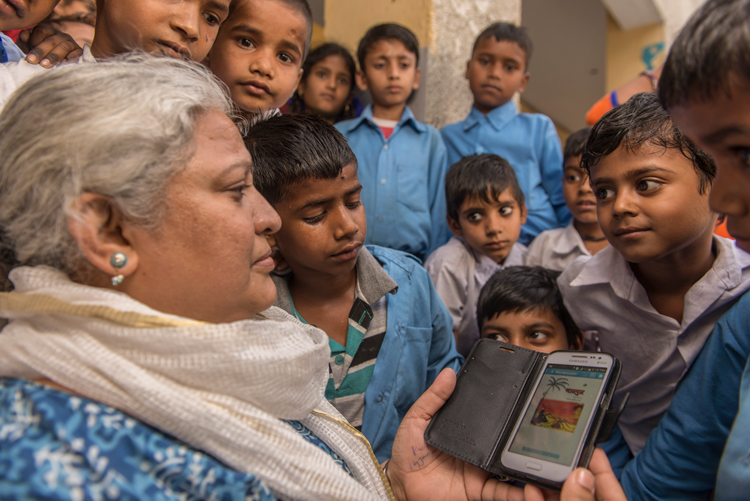 Many children in India are unprepared to start school with only 57.5% of children in Grade 3 able to read a Grade 1 text, according to the 2016 ASER Report. This lack of school readiness negatively impacts children’s learning outcomes and has contributed to a national learning crisis.  It doesn’t have to be this way.  Starting from birth, simple interventions such as parents reading aloud to their children can be powerful antidotes to poor learning environments.  Reading aloud to young children narrows the gaps in learning and introduces a world of ideas, vocabulary and concepts to young children.  Despite this, many poor households in India lack a culture of reading and have limited exposure to books, few organizations are working directly with parents and caregivers.

Digital technology and digital content have opened the possibility of putting a high quality children’s library in the hands of millions of parents and enabling them to be their children’s first teachers.  We are therefore incredibly excited that this pilot demonstrated that the Read to Kids model can reach hundreds of thousands of parents and caregivers with free access to high quality Hindi and English books and messages on the importance of early shared reading and parental engagement. In addition to the 200,000 families who accessed the app, initial results show that nearly a third of parents who were reached through our on-the-ground partners became frequent readers—a promising sign of the potential for deep, long-term impact.

We are also excited to be seeing this transformation at the individual level. For example, Pradeep is a father of 2 boys who now regularly reads to his sons using the Read to Kids app. Like many of the parents we have spoken to, Pradeep says it has been an important source of growth for his children. Watch his story here:

Our pilot has changed the behaviors of thousands of parents like Pradeep.

Looking into the Future

We’re closer now than ever before to understanding how to create an environment where a parent will pick up a book and make a difference in their child’s life. In September 2017 the results of an independent evaluation of our work will be released and will generate new knowledge to help hone the program and to share with the global community regarding how access to digital books can support a culture of household reading to young children in India. Our Read to Kids program began as a pilot and is now growing into a signature program available in other countries including conflict impacted communities. Read to Kids is now expanding to the Syrian crisis and aims to reach another 50,000 refugees and host families in Jordan.

As the program continues to learn and grow, we look forward to working together with Pearson and our other partners to make it possible for more parents and caregivers to read to young children and set the foundation for their children’s future learning.