What do magic and e-readers have in common? Award-winning author Nnedi Okorafor

Since Worldreader Mobile launched in early 2012, we’ve added two thousand books to our original 1,000 book offering. Despite the deluge of content, a few of our first, most popular stories have refused to budge from our top ten list. One such story, which has logged over 420 reader hours, and consistently attracts an average of 2,000 readers a month is The Girl With the Magic Hands by Nnedi Okorafor. Read what she has to say about her donation. 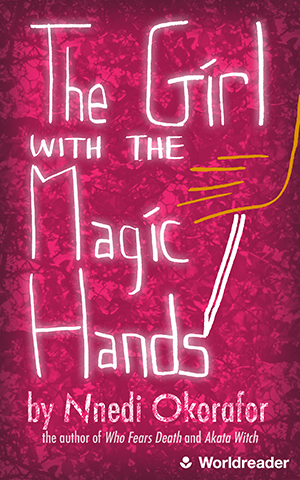 In some ways this uptake is unsurprising: Nnedi Okorafor’s imagination has been praised in the New York Times as “stunning” and her list of honors is half a mile long. It includes the World Fantasy Award for Best Novel and the Macmillan Writer’s Prize for Africa.

In The Girl With the Magic Hands we meet Chidera, a young Nigerian girl who is described as having “the saddest face you can imagine”. She is poor, her father wishes she was a boy and her mother spends her days complaining about her small garden and selling crafts no one wants. Chidera is at an all time low when a chance encounter with a group of mysterious women and the arrival of a magical pen lead to life changing realizations.

A few weeks ago we caught up with Nnedi to talk to about Chidera, her craft and find out what made her decide to donate The Girl with the Magic Hands to us.

1. At Worldreader we’re always looking for stories with strong, thoughtfully crafted female leads and Chidera definitely fits the bill. What do you consider when crafting your female characters?

My characters are always real to me. Before I start a story, I have to hear the character speak to me. So the crafting part is one of those parts of the creative process that is a mystery to me. My characters come to me whole and usually ready to tell me a story.

2. As an American born in Cincinnati to Igbo parents, how did this impact your writing? Also, what drew you to fantasy?

I was born in Cincinnati but my family and I moved from there while I was too young to remember anything about it. It’s actually the Chicago area that is the home of my childhood.  I think the fact that I write fantasy is both due to my Nigerian Igbo background (through which the magical and the mundane coexist) and my American background (through which I discovered the existing genre of fantasy).

3. The Girl with the Magic Hands has been read by hundreds of children in our e-reader projects in Ghana, Kenya and Malawi and on Worldreader Mobile it’s consistently one of our top books. What made you decide to donate this story to us and what would you say to other authors who are considering donating a story?

The Girl with the Magic Hands is one of my favorite stories and I could have sold it to a publisher for a nice amount of money. However, when I learned about Worldreader, I knew I would donate it there. Why? Because the story is perfect for the readers that Worldreader is reaching. Because the story is about the power, fun and creative force of art and I wrote it hoping that it would somehow reach girls and boys (and adults who are young at heart) in those parts of Africa fresh new books have a hard time reaching. I also donated it to Worldreader because I love what Worldreader is doing with its dynamic use of technology to encourage reading. What would I say to other authors who might consider donating? If you have some good stories that you want to share with parts of the world your work usually may not reach, then donate them to Worldreader.

4. Chidera’s life is transformed by her encounter with the women in the woods, but also by the acquisition of a possibly magical pen. Do you think that existing technology can similarly empower people to improve their lives?

Yes! Exactly. I have always imagined Chidera’s magic pen as being similar to a person with a Kindle or mobile phone loaded with books. It’s a start that leads to even greater life-changing things. It is access to so much. I think that technology can be very empowering when used in certain ways. Kindles and mobile phones are portable, small and stay charged for long periods of time- this ensures that they can be taken into and used in parts of the world computers can’t. And because they can carry (and continue to receive) so many books and still remain light, they have a better chance of saturating these parts of the world with information, stories and ideas than physical books. The Worldreader project is potentially revolutionary.

Why It Takes a Village to Eradicate Illiteracy