As a lean, nonprofit social enterprise, much of what we do is powered by the enthusiasm of our volunteers.

Now and again, Worldreader shines a light on their initiative, shares their on-the-ground experience with our broader community, and gives them a big public hug. You may remember, Sara Rhyne, for instance. She won our video contest last year, and was instrumental in helping with our Kenya launch in partnership with The Kilgoris Project. 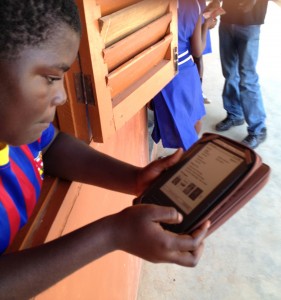 This time, we want to say thanks to another star volunteer, Carl Hinrichsen (twitter: @carlhinrichsen). Carl comes to us via ESADE Business School and brings with him know-how from the mobile sector, as well as from working at Amazon’s European Kindle Team.  He volunteered to help us sort out some e-reader connectivity issues we’ve been having in the field, and without hesitation, he put himself on a plane to Ghana to see what’s going on first-hand. Besides getting down to technical details about why some e-readers sometimes behave differently, he’s fundraising to cover his expenses and sending up daily news via his blog and twitter stream.

Here are a few things that have us in awe with Carl back in our Barcelona office and excerpts from his blog:

1. His knack for trouble-shooting and encouraging kids to use built-in features on their Kindles:

“I suggested they tried out the ‘text to speech feature’ one day, a function of the Kindle Keyboard, which reads out a book’s content with a computer voice. Stephen’s [A Worldreader student] opinion: ‘The e-readers are great to read by yourself, but sharing and using them together with someone makes you enjoy them even more.'”

2. The connection he’s building with Worldreader’s students and families:

“We went on to visit Mabel and her family, a smaller but equally welcoming family, consisting of Mabel, her parents, her sister Millicent and her baby brother Abdel-Asis. Mabel’s father is a cab driver, while the mother stays at home to take care of the family. Both Mabel and Millicent have an e-reader, and they are often seen reading together outside of their house. Their mother had become a great supporter of Worldreader’s work and reported how both children had improved at school and in speaking English. They did indeed speak good English, particularly Millicent spoke great English for a primary school student, benefiting from the being in the e-reader class, and reading at home with her elder sister. Together with Diana [another Worldreader student], we read another of their favorite books on the e-reader: Ananse and the Pot of Wisdom.”

3. His keen observation and the questions he asks:

“Towards the end of our chat I asked if he had any suggestions for improvements. ‘Reading Lights,’ he suggested, ‘So students can read at night. And e-readers for all the other classes as well, so people don’t constantly come and want to borrow ours.'”

Carl, thanks for rolling up your sleeves and diving in.

Soon, we’ll be announcing other ways folks like you can get involved with Worldreader. In the meantime, follow Carl’s adventures in Ghana, give him hat-tip on Twitter, or help him help us bring “Books for all.” 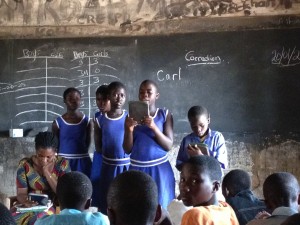 Putting e-readers to good use in the classroom. Photo courtesy of Carl Hinrichsen.