Bang for the Book

We’ve read some illuminating research about the power of books recently.  David Brooks’ column in the New 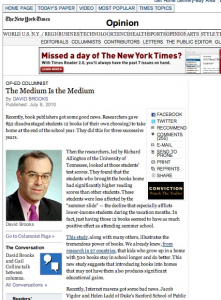 YorkTimes called “The Medium Is the Medium” succinctly makes the case for the power of access to books.  In particular, he points out that when researchers “gave 852 disadvantaged students 12 books of their own choosing over three successive years, their reading test scores were higher significantly higher than those of other students,” and that “just having those 12 books seemed to have as much positive effect as attending summer school.”

We were struck not only by the results but by the notion of “of their own choosing.”  Much of what we have learned suggests that this freedom of choice makes an enormous difference in children’s interest in reading.  It’s one thing to have access to a few donated books; it’s quite another to be able to get nearly any book you want.  In fact, recently we spoke with HBS Professor Pankaj Ghemawat, who told us the story of growing up in Rajasthan with a small library of 500 books.  Pankaj did well, but if he and his friends had had access to any book, instead of the very limited supply of 500, it would have changed their lives immeasurably.  The move from “supply constrained” to “demand-driven” reading is extremely powerful.

In the same article, Brooks cites a University of Nevada study our team member Elizabeth had previously discovered, asserting a very strong “book benefit” when large numbers of books are in a household.  The results, based on data from 73,249 people in 27 countries, suggest having a 500-book library boosted a child’s education by an average of 3.2 years.  (In some developing countries, the effect was twice that.)  This was was true across the world, and held independent of the parent’s educational background, the country’s Gross Domestic Product, father’s occupation or the political system of the country, according to the research.

Now, this study raises as many questions as it addresses, primarily about third variables like income, as well as the kinds of families that are likely to have more books rather than fewer.  But directionally, it’s compelling: money spent on books seems to have a pretty phenomenal multiplier effect on education.

At Worldreader, we’re working on many fronts right now.  Mike is off to Ghana to work with a local publisher and digitize their books, and new team member Miguel (more on him soon) will be providing support in Barcelona.  Colin just completed a TEDx talk on our work (more to come on that too.)  Elizabeth and David are in the US, in active discussions with various funding organizations and partners, and Susan is turning up the volume on our communications work.  Finally, Zev (while putting the finishing touches on his Masters’ thesis) is pushing our next set of trials forward, which begin in the fall.  Why are we all working so hard, even the day after Spain won the World Cup?  Because we believe passionately that we’re working on an important new way to bring books to the developing world, and we think it just might make a huge difference.

Some good news for Publishers

Books for All: Worldreader at TEDx Barcelona