Jumping on Board with The Book Pushers 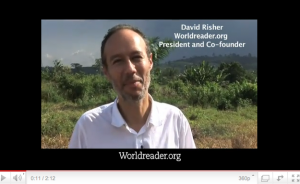 Worldreader‘s donors, such as USAID and SocialEndeavors, are helping us refine a system, based on e-reader technology, that will drive down the cost per book delivered to children in the developing world. That means more books in kids’ hands, plus mammoth ensuing individual and social benefits.  Students can dream bigger and ultimately live larger lives; widespread improvements in literacy will drive economic growth.

We’ve got the fundamentals working in our favor. A digital book costs less to produce than a paper copy, and far less to distribute. In most developing countries, the infrastructure for getting e-books from publishers into kids’ hands is already in place in the form of mobile phone networks. For less than one hundred dollars, Worldreader can send thousands of digital books to thousands of eager readers – bypassing planes, trains and automobiles, and saving weeks, even months, of time.  (For the sake of comparison, we did a little calculating this weekend: Worldreader sent 23,714 books to students and teachers in Ghana the weekend of January 15. Transatlantic shipping alone for print copies would have been about $50,000!) Although our model requires an up-front investment in e-readers for kids on the receiving end, we’re benefiting from falling prices. An Amazon Kindle, for example, dropped steeply from US $249 to $189 between 2009 and 2011.

Worldreader has long touted the fact that every e-reader is a library in hand. But we didn’t anticipate the extent to which that metaphor would hold true. Our ongoing Ghana iREAD study reveals that each student with an e-reader is sharing his or her device with at least three others – including parents, siblings and friends. The kids have taken charge and one-upped our wildest dreams: They now have portable lending libraries at their disposal!

In 2010, we confirmed our conviction that kids for whom books have been out of reach will soar if given a chance. We’ve witnessed how their grasp of e-reader technology is practically intuitive, and we’ve watched hundreds become avid consumers of books and periodicals overnight.  In 2011, we’ll conclude the Ghana pilot study launched last year. By July, we’ll have a clearer understanding of how and to what extent book choice boosts functional literacy. We’ll also have learned about how best and most efficiently to train teachers and provide ongoing support to students across primary, junior and senior high-grade levels.

But we’ve got groundbreaking to do as well – and that’s where our supporters come in.  The financial contributions we secure in the coming months will help us expand our footprint in Africa – launching additional pilots to build our store of knowledge and fine-tune the Worldreader model, with an eye to eventual deployment on a global scale.  Our donors will also help make available as broad as possible an array of books in every market where we’re operating.  Last December, as we launched iREAD and began planning for Worldreader 2011, we spoke to Ghanaian students at all grade levels about their dreams. We learned that they, like many of the world’s poorest kids, aren’t asking for much at all: just the eminently feasible magic of books in hand, so they can reach for more promising futures.

You can support us here

To Worldreader with love