Ghana: Technology and the Ides of March

Today we started in earnest the first ever trials of e-readers in schools in Africa, and it is already clear that the acutely economically poor and humble children here in Ayenyah, are as ready to absorb this new technology as the kids we have worked with in Europe.  And the reason is they are increasingly well prepared by their surroundings. 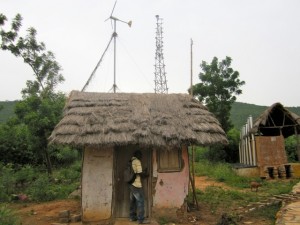 Internet hut with a satellite dish and an uninterruptible power supply. Powered by wind energy.

For example the village where we are working has Internet access together with solar and wind power facilities. Their connection is quite speedy, all things considered: a book takes 45 seconds to download. A book in 45 seconds is about 1000 times faster than the 5-year-book renewal cycle that schools are on now… not to mention the inevitable shipping delays that cause problems.

In addition, more widely, more fundamentally and much to the surprise of many in the developed world, mobile phone use is soaring in sub Saharan Africa, with cell phone subscriptions increasing by 60% every year between 1994 and 2005.

The mass use of mobiles is paving the way for a new generation of Africans who understand keyboards, wireless, and messaging and all that is related. Sometimes their own first awareness of the importance of literacy is through their habitual communication by SMS (text messages).  Mobile phone use is spreading very fast and has few limits.

The ceremonially dressed Chief (sorry no photos were allowed) who gave us kind permission to enter the tribal village to carry out the trials, had to reach into his top left breast pocket of his tunic several times during our summit meeting to fend off pesky callers at inopportune moments. Times are changing!

This all of course bodes well for the use of e readers, which rely on 3G mobile connections. We don’t know where this will all lead (and let’s make it clear: no one does) only that we are in Africa in a moment of immense social, behavioral and infrastructural change thanks in large part to the spread and adoption of technology. We already are starting to see with our own eyes the evolving world changing opportunities for the future.

The Ides of March are a day when you may ponder whether you should have taken more heed of those soothsaying fortunetellers who see doom and negativity written for the future. Certain Roman leaders wished they had believed a little more in the their description of problem to come. However there is obviously a moment to believe in the doubters and know when to ignore them.

In the case of worldreader.org, had we believed all of those who implied it was impossible to bring emerging first world technology to the poorest parts of the third world, we would possibly still be sitting in front of a PowerPoint presentation and nothing more.

Ghana: First day in the classroom