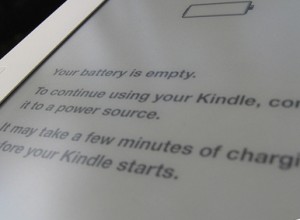 On our third day of e-reader classroom trials here in Ayenyah, Ghana, we arrived at school to find that about one-third of the Kindles were down to very little remaining battery life— some had the little exclamation mark next to the battery indicator, while others had the dreaded “Critical Battery” message on the screen.

One of the great features of e-readers is that their batteries typically last for a week or more between charges.  The Kindles had been used heavily over the previous 24 hours (we saw several groups of adults and kids circled around, looking at the books and the technology), but we couldn’t believe that kind of use would have drained the batteries that much. 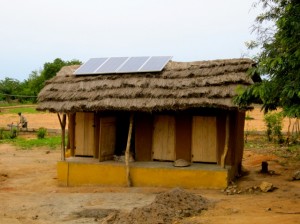 The solar cell that powers the school

The school has several ways to generate power— a windmill and a small set of solar cells that feed a set of 12-volt car batteries. So we were hopeful about being able to recharge the Kindles. But class was starting in about an hour, and the kids were going to need to use their e-readers. Meanwhile, we didn’t know how long it’d take to recharge the devices, nor how many Kindles we could plug in at any given time. We also needed to figure out what had happened to drain the battery life so quickly so that we might be able to prevent something like this from happening again. 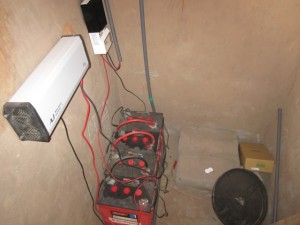 The 12 volt car batteries charged by the solar cell

After a bit of detective work, we learned that on those low-battery Kindles, the wireless GSM radio had been turned on. In the US or Europe, this isn’t a big deal, and constant connectivity is part of what makes the device so useful.  But Ghana doesn’t have wireless Kindle coverage. So, like cell phones, Kindles appear to work much harder when they can’t find a signal they recognize, as is the case here.  Consequently, the battery drains much more quickly.

[By the way, it’s worth pointing out that the reason the Kindle doesn’t recognize the mobile phone network here isn’t technical; it’s contractual. Many families in the community have a mobile phone; in fact, like so many U.S. schools, there is a “no cell phones in the class” policy. While we don’t know for sure, we assume that mobile operators here are simply charging more than Amazon is willing to pay for data transfer. We’ll discuss wireless e-reader networks in another post.] 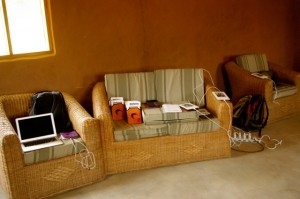 Kindle charging station set up in the village clinic

At this point, we had 45 minutes before class was due to start. We rushed to the powered area of one of the school’s buildings, hooked up a power strip to four Kindles (we have a full bag of cables and adapters), and by the time class started we’d brought them back to 60% power!

Along the way, we also discovered why the batteries had drained so quickly.  You can tell the Kindle to turn its wireless radio off, which we had done.  The problem comes when you have students browsing through menus and selecting options, as kids are prone to do— and which we encouraged, since a wonderful thing about e-readers is that you really can’t do much to damage them. But this means many of them inadvertently turned on the radio signal; trying to browse the Kindle store is an example.   This is now another item in the list of issues that we track.

Then we marched back into class and delivered the devices back to the students, who had been a bit anxious that they’d not see them again.  Later, we spoke with Richard, the local IT guy who will be responsible for the Kindles when we leave, and we showed him how to top off the devices and informed him how to train the students not to activate the radios. We were pleased that the Kindle’s modest power requirements fell well within what the school’s solar cell could supply. After a hectic third day in Ayenyah, we had worked our way through a number of teething issues and successfully come up with solutions to the problems that emerged. All was well, and we had learned a lot.

Ghana: Technology and the Ides of March