If you are reading this blog (and thank you for reading!), you are what we call a potential “Friend of Worldreader.” I became a Friend of Worldreader about six months ago, during a 90-minute “deep dive” into this very website. I didn’t intend for it to happen. It was my first visit. I wanted to do a quick, 10-minute survey, and 89 minutes later I looked at my watch and said, “Wow! What just happened?” Sometimes the deepest friendships happen that way, with an inconsequential first meeting that has the greatest consequence for your life and the lives of others. Something similar may have happened to you, and here you are again; or here you are for your first visit as the case may be.

Most Friends of Worldreader (or FOWR as we fondly phrase it) are at least peripherally aware that we are donor-supported. But it’s kind of a big mystery to many, to be honest. Friends and family often ask me, “Where does the money come from?” and “Isn’t asking people for money really hard?”

You may be astounded at the answer.

What does this award-winning David Mamet play have to do with it?  Some would say that nothing else in literature distilled fear, money and power into their vital essence than this powerhouse of the written word. There is a link – and it has to do with the idea, quite commonly held, that fundraising must be, frankly, frightening to do, and must come with its own bitter shot of rejection. They imagine being asked to talk to donors as something on the same plane as being asked to “sell door-to-door” or work for a collection agency. Brrrr! Not me. Never!

I was intensely curious before my first one-on-one telephone conversation with a Worldreader donor. I wondered if there would be awkward pauses in the conversation, whether I might run out of things to say. Would I feel as if I was pulling myself up an impossibly steep hill?

I began my conversation by asking the simplest question: What led you to become a Worldreader donor?

Rather than a difficult dialogue, I listened intently for 10 minutes while this wonderful person literally poured their heart out to me. It was like pulling the cork from the side of a wine barrel! 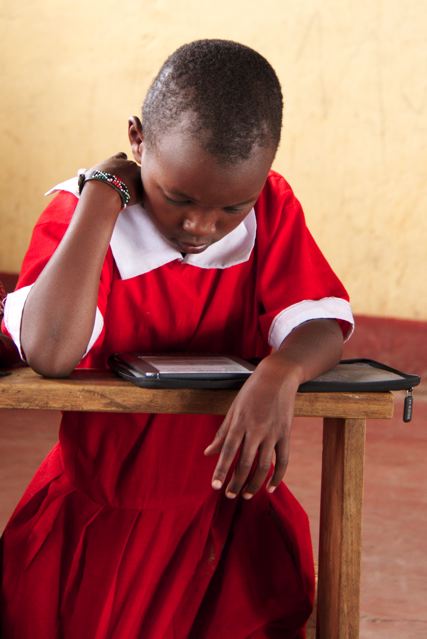 I started asking others the same question. They spoke intensely about their passionate belief in making a tangible difference in the life of a child, and their deeply-felt need to do good in a very difficult world. They talked about their heartfelt love of books and the effect that books had on their life and the lives of their family members. They said the issue of children in the world growing up without books resonated with them and they felt frustrated at not being able to do something about it.

It didn’t take me long to realize that that singular experience was the rule, and not the exception.  Over and over again, donors eloquently expressed their thoughts and feelings in response to the simple question.

And I’m not talking about the uber-rich. Some are retired schoolteachers living quietly in small communities. Some are still in the early stages of their careers, and are working quite hard to endow their families with a future sense of security. Some are even giving sacrificially. All of them, despite the differences in age, career stage or personal wealth, seem to share the same soul: I think they literally “can’t not give.” It is a drive they seem to feel on a deep level, one of almost primal urgency.

I don’t (yet) get to talk to every one of our donors one-to-one. But I am really looking forward to doing so. The truth is, you would too. Because it’s not about the money. Once you’ve heard them speak, asking for their support is not difficult at all. In fact, more often, they say, “What can I do for Worldreader?” before I can ask, “Would you like to join with us in support?.”

So, fellow Friend of Worldreader, what brought you here today?

If you are a donor, what inspired you to give?

Finally, if you have been reading our email newsletters (you can subscribe on our home page) these last few months, you will note that we are focusing less now on reporting our “startup” progress about how we’re getting Kindles into schools, and much more on the effects of our programs on the life of a child. Last month, we heard about Okanta Kate, the 17-year-old aspiring writer. Soon, you will hear about a young woman named Rita and her aspirations. Our goal is to bring you one of these stories a month. We’re sure you will enjoy them!