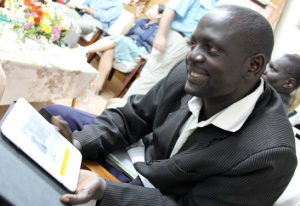 Shadrack Lemiso, headmaster and now owner of a special book

Shadrack Lemiso is the headmaster of Intimigom Nursery and Primary School, just outside of Kilgoris. In 2009, he graduated from the University of Nairobi with a Bachelor’s degree in Education.  Shadrack, more than most, understands the value of education because he had to fight hard to get his.  When he was younger, he lived a traditional Maasai life herding cows.  His parents were not in a position to send him to school.  When he turned 16, he decided to pool his meager savings and go to school for the first time.  He started in second grade.  Illiterate, his classmates and even the teacher laughed at him, and nicknamed him “Old Man.”  By the end of the year, he had topped his class.

He continued to excel academically, completed high school, and got into a teacher-training academy.  To raise money for school, he held “fundraising dinners” at home (relatives donated a cow, they cooked a feast, those who attended donated money) to raise money for school.   With the funds and a loan from his brother, he set off to become a teacher.

After many years as a teacher, he saved up enough money to enter the University of Nairobi, and graduated with a BA in Education. There was one book he needed for his studies that he could never get his hands on: “Readings in the History of Education” by Edward Norton.  The inability to get this book became a source of great frustration.

Last week, when I was at Intimigon School with Worldreader, I ran through how to use the e-reader with Shadrack.  One of the first questions he asked me was whether the e-reader could help him get books he needed like Readings in the History of Education.  I hesitated.  I told him there were hundreds of thousands of books available, but I didn’t dare make a prediction one way or another about this book he wanted (and I have never heard of). 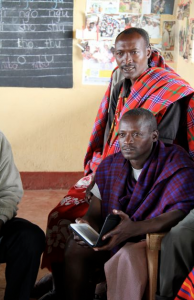 But we decided to try anyway.  We turned on the wireless and connected to the Kindle store.  Not only was the book available for his e-reader, it was also free!  It had fallen out of copyright and been digitized by Project Gutenberg volunteers.  He clicked the “Buy” button, and 5km outside of Kilgoris, on a small hill overlooking the Rift Valley, with five bars of EDGE coverage; we received his book in 6 seconds! Moments later, he was reading through the book he had previously been unable to locate.  It’s not often you see a Maasai with tears in his eyes.

A deeper look into teachers’ motivation

Jumping on Board with The Book Pushers