African Publishers Making “Books For All” A Reality

There are things we take as a given. Things we know because we live them every day.

We know, for instance, there are not enough printed books for every student in Ghana or anywhere else in the developing world. A teacher told us that he has only eight textbooks for his 50 students, and in many other classrooms, the stats aren’t any better.

We also believe that giving families and schools access to electronic books via e-readers will change people’s lives, and that by working with local and international publishers we can offer kids more choice in the books they read.

We have to remind ourselves that this may not be intuitive for everyone else. Telling people how e-books are downloaded via mobile phone networks and land in the hands of kids in the world’s most under-served markets sometimes elicits a shoulder shrug or a “That sounds nice” facial expression. So, it’s incredibly encouraging when folks move beyond the logistical complexities and a bright light bulb switches on — and stays on. That’s when we know the “Books for All” idea really sinks in. 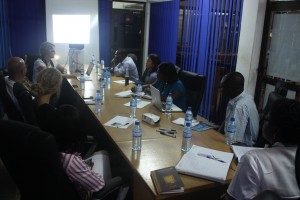 Elizabeth Wood, our director of digital publishing, and other members of the Worldreader team had another one of those moments a couple weeks ago in Accra, Ghana. After a face-to-face roundtable discussion, heart-to-heart individual meetings, and a field trip out to the schools, representatives from 10 Ghanaian publishers saw first-hand the overwhelming need for books in rural districts and the impact together we’re already having on children’s lives. Now, more than ever, they want to help move the revolution even further along.

Although we’ve been engaging with them for many months and they have led the way in becoming key Worldreader partners, there was something that tipped the scales this time. An emotional connection was bridged. They got to actually see kids read on e-readers, and hear teachers talk about reading improvements.

“I have read about [e-readers] online so I knew something about them, though I have never physically seen one. I also did not have a practical knowledge of how it works,” Faisal Ibrahim, EPP’s national market coordinator, corporate market, told us. “I was skeptical about its effective use in remote parts of the country by young school pupils until our visit to [the primary school]. I was amazed at the way children were confident in the usage of the device. Their attachment to the device was remarkable.”

“Partnering with organizations like Worldreader will have a positive impact on education in Ghana and Africa. Inadequate access to educational materials, like books, has been one of the major causes of poor performance in schools,” Faisal added. “Worldreader’s device puts a whole library on a device. This will greatly enhance studies and learning. The future will be brighter if every school going child in Africa has a Worldreader.”

Elizabeth recounted an on-the-ground conversation between the publishers and school officials exactly on that topic. Matilda, the headmistress at one of junior high schools participating in the Worldreader pilot, was asked by one of the publishers, point blank, “Is this working?”  She answered, “We have two classes, A and B.  Before Worldreader, the B class was much stronger than the A class. So we chose to give the e-reader to the A [class], so that it might help them to catch up to B. Now, you will see for yourselves. The A class has passed the B class; they are now the stronger ones. What we really need is this program for our whole school.”

But, as Worldreader knows, it’s not just about giving African kids access to international books or regional favorites. Kids the world over would appreciate access to African literature as well. Publishers recognize how Worldreader assists in closing that gap. “Our stories are just beginning to be told,” commented another publisher.

“The project gives exposure to the books, far beyond the borders of Ghana,” added Akoss Ofori-Mensah, managing director of Sub-Saharan Publishers,  “Just [a few weeks ago], a librarian in Florida bought 75 copies of The Cross Drums for a cultural exchange project between 6th graders at Berkeley Preparatory School in Tampa, Fla. and 6th graders at Ramseyer School in Agogo, Ghana. She said she found out about the book through Worldreader.”

Of course, there will be many more meetings of the minds like this in the coming months. 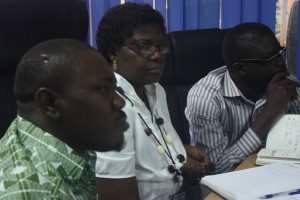 Swapping ideas and partnering with progressive-minded publishers is how we will reach even more children and families around the world. We’re looking forward to those discussions.

Read more about the impact Worldreader’s African publishing partners are having here , and please check out our growing list of African titles.

If you’re a publisher and would like to get involved with Worldreader’s “Book For All” mission, contact Elizabeth Wood at elizabeth@worldreader.org.

David is a Microsoft Integral Fellow!